How are DC motors controlled? - Speed control of DC motors 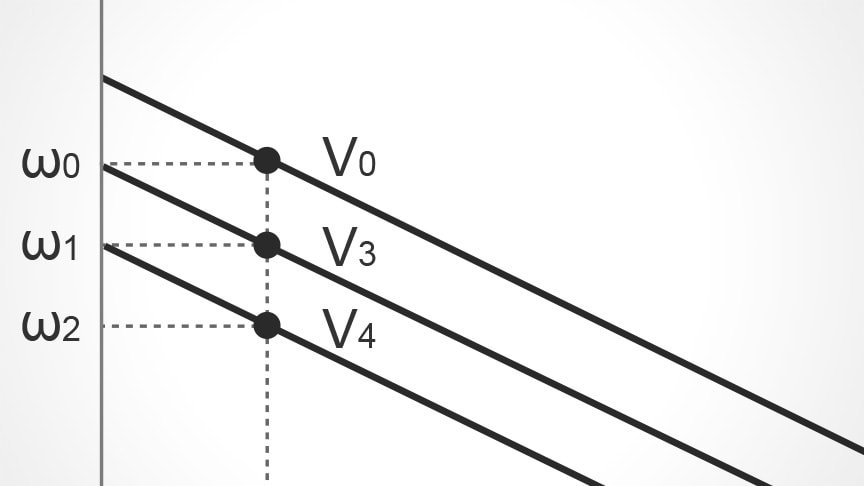 DC motors are powered by direct current. They have a wide range of applications in products such as household appliances, vehicles, and factories. You could say they play a vital role in our lives.

However, many users express uncertainty about how to control the speed of DC motors. This page provides a simple introduction to how this is done.

What is a DC motor?

First to begin with, an electric motor is a machine that uses electricity to turn a shaft, thereby converting electrical energy into mechanical energy. Electric motors are broadly divided into the following three types.

A brushless DC motor, in contrast, avoids the need for a commutator and brushes by having a permanent magnet in the rotor. This, however, means they require a drive circuit. They also feature low maintenance, quiet operation, and long life.

Unlike AC motors, DC motors are very easy to use because of the ease with which their speed can be changed. So, how is this achieved in practice? The following explanation starts with looking at DC motor characteristics.

The characteristics of a DC motor are represented by a torque-speed curve that slopes downward to the right, with torque as the horizontal axis and speed as the vertical axis. The speed is highest when there is no load, falling away to the right until maximum torque is reached at zero speed. 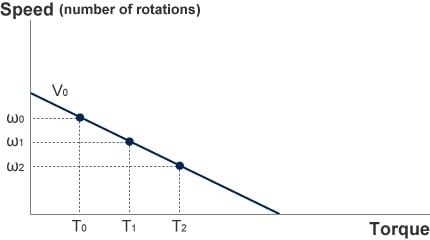 A look at the relationship between torque and current shows that these are proportional to one another. The ratio between the two is constant for a motor, with the relationship remaining the same regardless of changes in motor speed or drive voltage. This means that measuring the motor current on its own is enough to determine the motor torque. 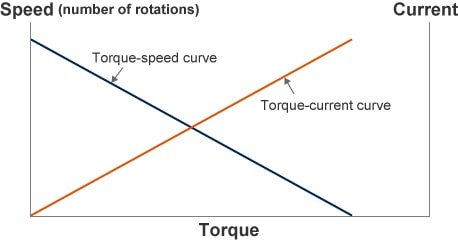 What happens when the drive voltage is changed? 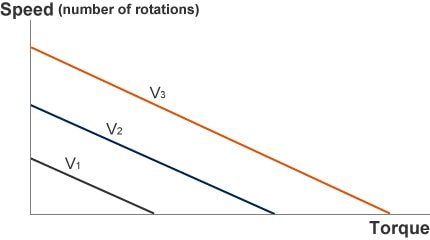 Now, given these characteristics, how can you rotate a motor at a required speed at any given load torque? 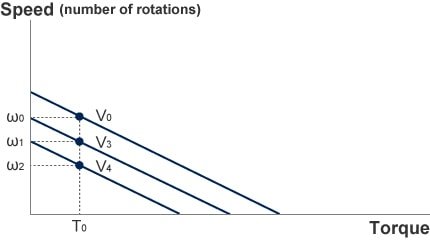 By adjusting the drive voltage in this way, a DC motor can be made to rotate at a desired speed regardless of load torque.

Two ways of adjusting the drive voltage are linear control and PWM control.

Linear control works by placing a variable resistor in series with the motor, and adjusting the resistance to vary the voltage across the motor. While a transistor or other semiconductor device can be used as the serial-connected variable resistor, this approach has poor efficiency due to the large amount of heat generated by the resistance (semiconductor), and therefore it is rarely used these days.

An alternative technique is the PWM control. The voltage applied to the motor can be varied by turning a semiconductor switch (such as a transistor or an FET) on and off at high speed, with the voltage being determined by the on and off pulse widths. The high efficiency of this technique makes it most commonly used nowadays. 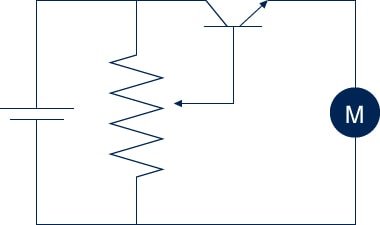 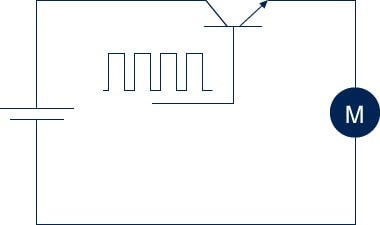 Use of these techniques allows the flexible adjustment of DC motor speed. However, additional control is required to keep a motor running at a constant speed. This is because the motor’s load torque varies due to the load itself, as well as other factors such as temperature, humidity, and changes over time. Simply driving the motor with a constant voltage will result in its speed fluctuating with changes in load. 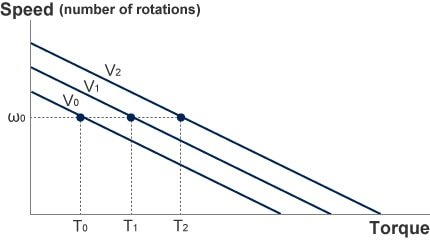 The speed is measured by a sensor attached to the motor. The difference between the measured and desired motor speed (speed error) is calculated, and the drive voltage is controlled in such a way that it is increased if the speed is too slow and reduced if the speed is too high. Doing this maintains a constant motor speed. While past practice was to use op amps or other analog circuits to control the drive voltage, the use of microcomputers has become the norm in recent years.

A DC motor can achieve steady operation by controlling its speed to remain constant regardless of changes in load. These motors are also suitable for a wide variety of control practices that can be implemented using a microcomputer. DC motors find uses in many different applications that take advantage of their ease of control.

DC motors are powered by direct current, and, unlike AC motors, their speed is easy to adjust. The characteristics of a DC motor are represented by its torque-speed curve, in which speed and load torque are inversely proportional. This torque-speed curve translates with changes in drive voltage. Accordingly, by adjusting the voltage applied to a DC motor, it can be made to run at any speed regardless of load torque.

ASPINA supplies not only standalone brushless DC motors, but also system products that incorporate drive and control systems as well as mechanical design. These are backed by comprehensive support that extends from prototyping to commercial production and after-sales service.
ASPINA can offer solutions that are tailored to suit the functions and performance demanded by a diverse range of industries, applications, and customer products, as well as your particular production arrangements.

ASPINA supports not only customers who already know their requirements or specifications, but also those who are facing problems at early stages of development.Do you struggle with the following concerns?

Links to glossary and FAQs pages