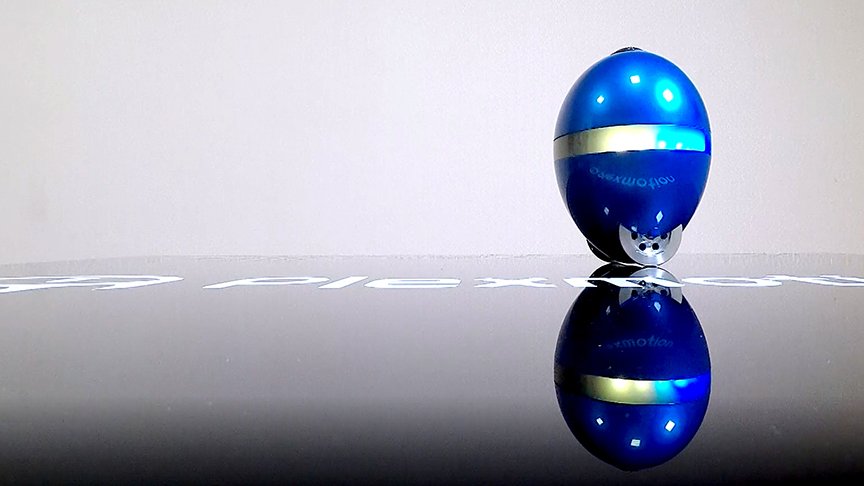 A 15th-century Italian explorer Christopher Columbus once stood an egg on its tip to demonstrate his achievement of voyaging beyond the Atlantic Ocean. "Something as difficult as standing an egg on its end can nevertheless be achieved with the boldness to rise to a challenge, new ideas and sufficient capability." More than five centuries later, ASPINA has set out to surpass this story by giving standing eggs the capability to move around.

From there, we developed the Plegg, an inverted two-wheeled robot that makes use of motor control and a range of other advanced technologies. For instance, image recognition and position detection, incorporated inside an egg-shaped housing. The Plegg is intended to be used as a virtual product for demonstrations at trade shows or at customer meetings.

New applications that call for our capabilities are emerging one after another. One example, intended to address the problem of labor shortages in manufacturing and other industries, is the development of modules and systems that are used in "cobots" (collaborative robots), automatic guided vehicles (AGVs) or autonomous mobile robots (AMRs) and move them about a factory automatically. The Plegg provides a clear demonstration of ASPINA's capabilities.

The Plegg maintains its balance by detecting its tilt using built-in sensors and controlling the two motors driving its wheels accordingly. ASPINA developed the Plegg as an inverted pendulum that gives the robot smooth running and still standing by repeating balance control in close intervals.

Building this inverted pendulum system required not only control of motor rotation but fully synchronized positioning of the two wheel shafts that are connected to two brushless DC (BLDC) motors with current vector control by a single microcomputer, and also required tilt sensing using a three-axis accelerometer and three-axis angular velocity sensor. To achieve this, ASPINA drew on the expertise we have built up in areas like motor control as well as in the use of torque control to get motors to respond precisely to changes in tilt.

To enable Pleggs to move around a defined area, ASPINA developed a new system with a host machine that receives position information from the Plegg wirelessly and sends back instructions to the Plegg. The first iteration of the system mounted a fisheye camera on top of the Plegg and used the camera to determine its position by detecting position markers attached on the area wall. The problem with this was that, because the color images acquired by the fisheye camera also contained other light sources such as fluorescent lighting, it proved difficult to distinguish the markers from those disturbing lights. We made special modifications on the camera and the position markers to try to prevent from the disturbance.

Even with the modifications on the camera, keeping the Plegg upright perfectly was still a challenge. ASPINA then developed new algorithms that filters the images captured by the fisheye camera and then determines the markers from images with disturbance so that we were able to stabilize the positioning accuracy.

Another problem involved time discrepancies between the input data (such as camera images and the route traveled) and the actual movements of the Plegg. Reasons for this included delay in images of the fisheye camera. This problem too was overcome, in this case by using odometry information and applying a calibration method ASPINA developed. 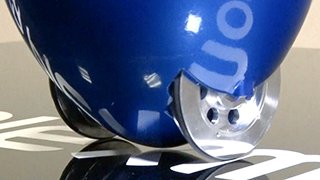 ASPINA has built up more than 50 years of experience in the business of developing and manufacturing not only electric motors, but also optical drives and printers which work with motors, and more recently, industrial high-speed cameras and assistive technology products.

Through its involvement in this business, ASPINA has also acquired a diverse portfolio of technologies that extends beyond electric motors to include image & video processing, robotic control and wireless communication. The company has also built up expertise and a workforce skilled in product design. This expertise extends from exterior design and mechanical design to the design of hardware for power management and data processing circuits, as well as firmware and other software design.

ASPINA is also proactive about sharing personnel and information among the departments responsible for these different areas of expertise, with many engineers acquiring knowledge from working in a variety of different departments over the course of their career. These departments might include, divisions that deal with electronic equipment, system equipment and R&D. This has equipped ASPINA with a diverse range of technologies and a workforce proficient across this full portfolio, resulting also in the development of products such as the Plegg that feature a distinctive appearance as well as complex configuration and control.

For example, the path traveled by a Plegg is determined using a method that has little to do with past approaches to robot route design, and instead was put together in a comparatively short time by drawing on CAD data processing techniques. The idea of suppressing disturbance to the fisheye camera and the egg-shaped design widely regarded as cute were both suggestions put forward by staff involved in planning. 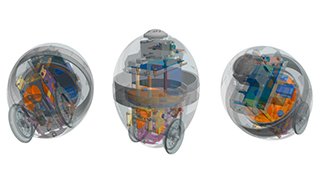 What ASPINA hopes to achieve by showing off the Plegg to trade show visitors and others is to light a fire under ideas that may already have been lurking in the backs of their minds, thereby encouraging the visitors to develop their new products.

In fact, one of the corporate visitors to a trade show, on seeing how the Pleggs moved, inquired whether the same method could also be applied to the undercarriage used for moving robot bodies manufactured by his own company. While the Plegg was a small robot made for demonstration purposes and could not be used in its current form, ASPINA successfully produced a sample undercarriage unit suited to the customer's needs by using the circuit board built for the Plegg to drive two motors.

ASPINA also hopes to deploy the diverse expertise it gained from developing the Plegg in other robots suited for use in a wide variety of fields. As the two-wheeled inverted pendulum mechanism has a tight turning radius, suitable applications include patrol robots for use in security and surveillance. Similarly, the expertise acquired in image recognition can likely be put to use in the vision systems that enable robots to see. Position detection and wireless communications, meanwhile, have applications in products that interoperate with AI systems, such as those for operational control or fault detection.

ASPINA, as one of the most capable technology and solution companies in the drive system industry, intends to supply movement solutions for new fields and applications that the world has never seen before that are likely to become essential in the future. 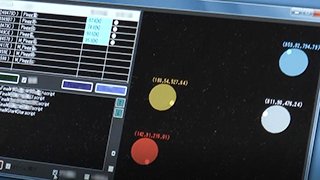 The host application remotely controls the movements of multiple Pleggs via a communication link.